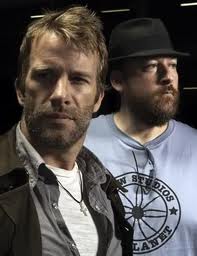 Raw Studios will have an exclusive, Comic-Con only limited Edition issue of BAD PLANET #7!  Art by Gregory Staples and cover by James Daly and Tim Bradstreet.  They will be signing copies at the booth.

IN THE WORKS FOR RAW STUDIOS:
-Graphic Novel adaptation of Thomas Jane's 3D 'Psycho-Noir' DARK COUNTRY, which was released by Sony Home Video.  The brilliant THOMAS OTT has signed on to do the GN, adapting the film in his signature, wordless style.  Also included will be the original short story the film is based on by TAB MURPHY (TARZAN.)

Raw Studios is also proud to announce our collaboration with BRUCE JONES (TWSITED TALES, THE HULK) on the rebirth of his classic ALIEN WORLDS! A graphic novel with all new stories in in the works, with RICHARD CORBEN and RAFFE GARRES already on board.

Join Raw Studios at Comic-Con in San Diego next week from Thursday, July 21st to Sunday, the 24th. Our booth number is 5539!

Description:
Join Thomas Jane (Hung, The Punisher, RawStudios.com) in person with industry stars Tim Bradstreet (The Punisher, RawStudios.com), Jimmy Palmiotti (Jonah Hex, Painkiller Jane), David Uslan (Graphicly.com, Branded Entertainment), and Pepe Moreno (Batman Digital Justice, Rebel, Amusedom.com) to discuss the rapidly emerging digital distribution platform of comics!! We’ll provide an in-depth look at the creative and business aspects of the digital medium, aiming to demystify the taboos associated with digital comics and demonstrate how they can be more accessible for consumers and profitable for artists. You will learn how it all works together; from social media marketing to world-wide simultaneous distribution on multiple devices. With a moderator like Geoff Boucher (LA Times, Hero Complex), this will be a panel you won't want to miss! Room 8