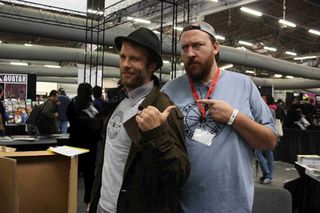 Per popular request, these are the upcoming festivals Tim and Tom will be attending in the coming months. Hope to you see you there!

(Click the show links for all info on show, guests, registration, and updates.)

White Wolf/CCP present – The Grand Masquerade (Bradstreet only)
New Orleans, Louisiana – September 15th through the 18th – Hotel Montelone
"Few locations invoke the mystery and charm of days gone by like the New Orleans French Quarter. Within the quarter itself none can match the historic grandeur of the venues selected for The Grand Masquerade. The Hotel Monteleone and the Royal Sonesta, two of the most luxurious hotels in the Vieux Carre Collection, will provide a lavish European inspired World of Darkness experience unlike any other."

Los Angeles, California –  September 22nd-25th.  The 3D Film Festival has something for everyone from age 8 to 86. Our kids 6 family program features some of Hollywood's most beloved 3D Animated and live action films. The midnight  3D Horror show features a selection of debut and classic 3D horror to our silver screen. This year 3DFF will launch its new 3D comic book movie showcase. Audiences will also see the return of our popular 3Dology shorts program and our star studded red carpet premiere events.

Long Beach Comicon (Tom and Tim in the RAW booth!)
Long Beach, California – October 29 and 30 – Long Beach Convention Center
Join Jane and Bradstreet plus the legendary Bernie Wrightson, Steve Niles, Jimmy Palmiotti and Amanda Conner, plus many, many more.
2011 LBCC also features the world premiere release of Darwyn Cooke's, PARKER: Martini Edition Collection!
Be sure and join us for our 3rd year, anchoring this wonderful convention – All happening in one of the greatest locations for a comic show - LONG BEACH, CA.
Restaurants, movie theaters, bars, food, shopping, aquarium, even The Queen Mary, all within easy walking distance