YOU WILL KNOW YOUR DOOM WHEN YOU MEET . . . THE HANGMAN

Here’s a peek at Hangman #3 from Dark Circle Comics, AKA-DCC. Hangman is written by Frank Tieri (AKA-Frankie the Fork), author of numerous dark and twisted tales. Frankie is a man of the cloth, a brother, and a mensch (unless we’re sitting next to each other at dinner).

I’d like to also give a shout-out to my Hangman model, Justin (Clubber) Lang. Justin is a SD area theater actor who brings a great deal of badass, and a magnitude of acting credits to the role. JL was also my model for The Shadow, and The Shadow Now, from Dynamite. See? A little back-story never hurt anyone. . . To wit, I present the cover art (at right).

Here’s the logline – Damned, Part 3
“Damned, Part 3” From the very depths of Hell… a new Hangman arises! Can this newest incarnation of the urban legend do what it takes to save his soul — or will he walk the Earth forever unredeemed? He will if the demon Azmodeus has anything to say about it! 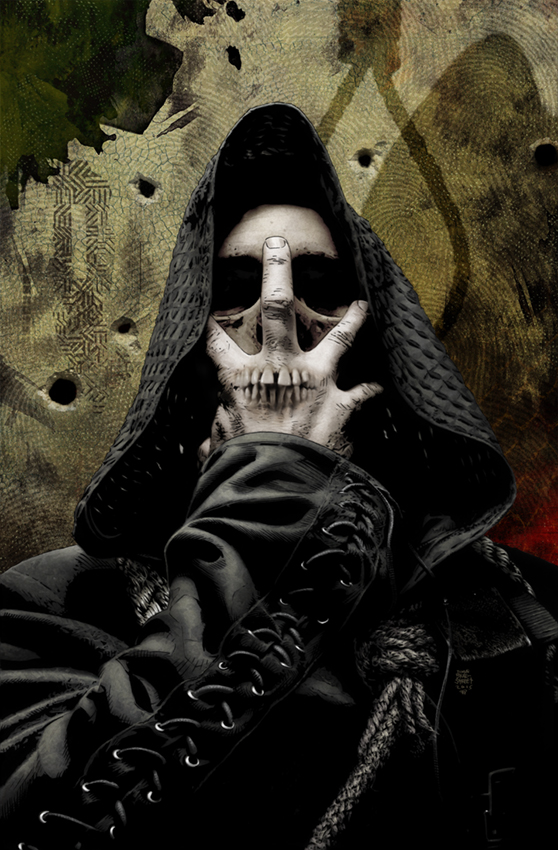 Friends – Another great show in Sacramento this past weekend, and as always, it was accompanied by a post-con trip to RENO for stress relief and debauchery. Major thanks to Anthony L & Carly (Curly) B. We had a full house of madness and a deeelightful drink n draw gathering, without much drawing . . . Undying affection thrown out with wreckless abandon towards, Nick da Hat, Sir Jake of Hempsville, Paul Host, Trevor (MIA) Trevorson, 7th Earl of Badass* – Adam of Kellenberger, that nice couple whose names I can never remember, Little Steven Wyatt, Dan Brereton, James O’Barr, Bernie and Liz Wrightson, Vince Locke (rocks), Chris (Krack-A-Poo) Wisnia, Mark & Molly Bode, as well as, the fine men and women of the Sacramento Police Department . . . . . . .

As a part of the festivities I was commissioned to illustrate Halo’s Master Chief for a free poster giveaway (artwork at right). Convention attendees were also treated to an appearance by Steve Downes (the voice of Master Chief), who was on hand signing autographs for the fans. As an aside, I have to say that it was a complete treat to stand around and watch Ren & Stimpy/New Adventures Of Mighty Mouse creator, the awesome John K, working away on several convention sketch commissions. WOW. Also, it was a great honor to spend some time with the great Mike Zeck Aaaaaand the infamous Michael Golden. Seems like I spent zero time with my buddy, Darick Robertson (Transmetropolitan), so that’s one we owe each other. All that cool-tastic-ness, and then just sprinkle on a dazzling dash of Thomas (the torch- bearer) Yeates! It really doesn’t get any better. NEXT time I’m bringing TJ. Vaya con dios – 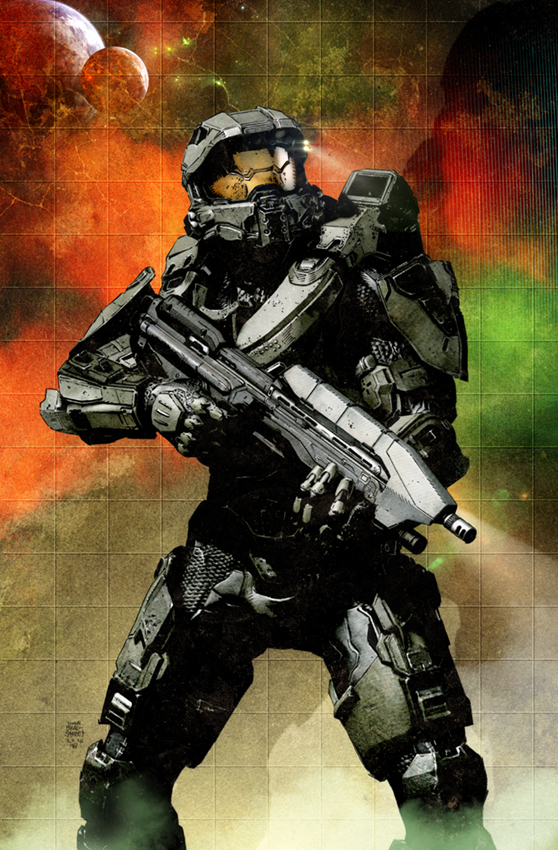 Here’s what’s going on inside –

Limited 1 for 25 Retailer Incentive Variant Cover. Written by Neil Gaiman. Art by Mark Buckingham. Cover by Tim Bradstreet. Fear and paranoia are alive and well in The Golden Age. For Sandra Walsh, every dark corner in The City conceals a threat – but does one hold the truth? Neil Gaiman and Mark Buckingham’s first Miracleman story, ‘Screaming,’ reintroduces a familiar face from Miracleman’s past! The Golden Age’s god of the dead joins Miracleman’s Infra-Space ‘Retrieval.’ Including material originally presented in MIRACLEMAN (1985) #21 and TOTAL ECLIPSE #4 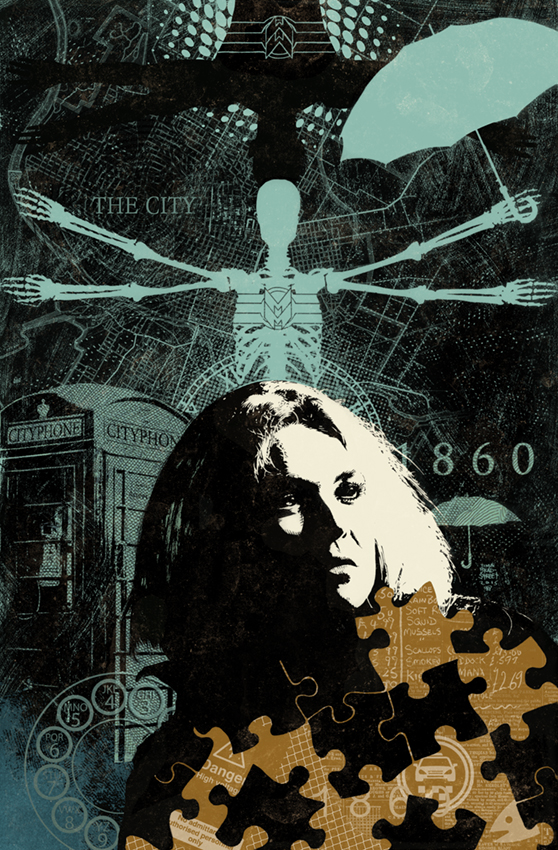 Did this one for some pals of mine over at Printed In Blood.

The truly fun part of doing these film poster re-designs is the freedom to take the concept in almost any direction. Are you kidding? Doing poster art with zero interference from film marketing’s tired, ‘lowest common denominator’-style art direction? But do I smell a rat? A varmint in the varnish? A yin in the yang? Is studio marketing this diabolical? I say NAY. You can also blame the mindless distributor element; “Just slap sumthin on the cover there. Y’know, some giant re-touched photoshop heads. Whatever, as long as it’s cheap!!”

Lemme get off the soapbox before I derail my own post (I do that sometimes).

I’ve been doing movie poster-style illustrations since I can remember. Been in love with the art-form since before I knew what to call it. To me though, when you break it down it’s simply single-frame storytelling . . . But more on that later . . .

My favorite Nightbreed character was always Narcisse. He’s a complete mess until he becomes Nightbreed. Then he’s just like – Elvis is your tour guide through Purgatory. I really wanted to make a Narcisse quote the tagline here, “I love a coward!”, but felt that to be a touch too cheeky and obscure . . . No. It felt right to ace a tagline entirely. Anyway, I hope fans of the film appreciate it. Little touches like the illustrated prophecy depicting Boone’s ascension reflected in the sunglasses. Also, superimposed on the thumb-hook (and repeated in the shadows of Narcisse’s stetson) is a rudimentary overhead map element depicting the Necropolis called Midian. 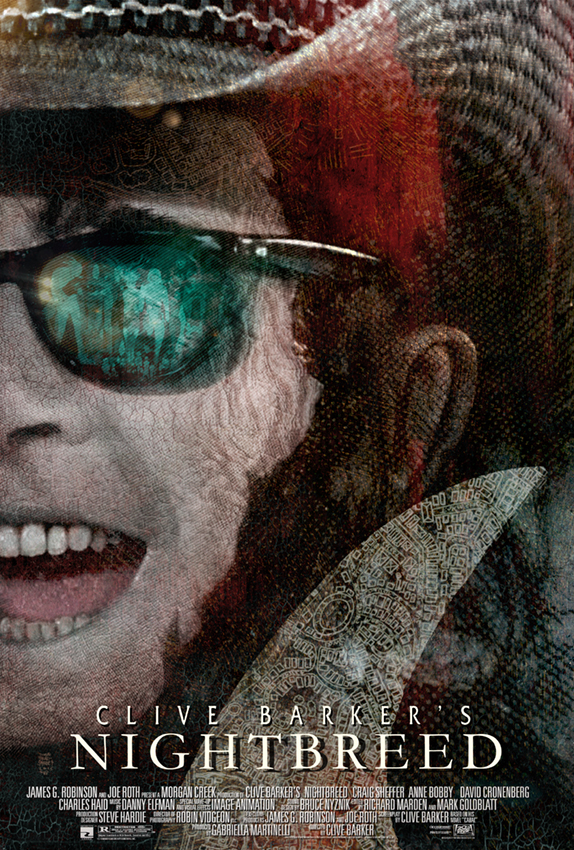 Not only have I been off the grid for a while, we’re dealing with a brand new website (which we plan to update regularly) . . . If you know anyone who’s a fan of Tom’s or a misguided soul who likes my work, please pass the word along. We want to establish this site as our home, and we want to earn your patronage 😉

Now to business . . . Back in August of ’15 I was contacted about creating a one-sheet teaser poster for The Warriors (reboot in development). It was a very difficult choice . . . I spent all of a nano-second debating the pros and cons before blurting out, YES! I remember well that Halloween eve I spent overnight at me ‘ol pal, Rick Matthews’ house back in 1981. Rick had HBO. I didn’t. BAM! By 8:12pm CST my heart was racing. By 8:30pm, Swan was War Chief and my life was forever altered for the better by a little film that cost less then the last home I purchased . . . This guy, director Walter Hill was someone to keep an eye on. OK, then skip ahead a measly 34 years to the first sentence of this paragraph. THAT, my friends, is full circle. 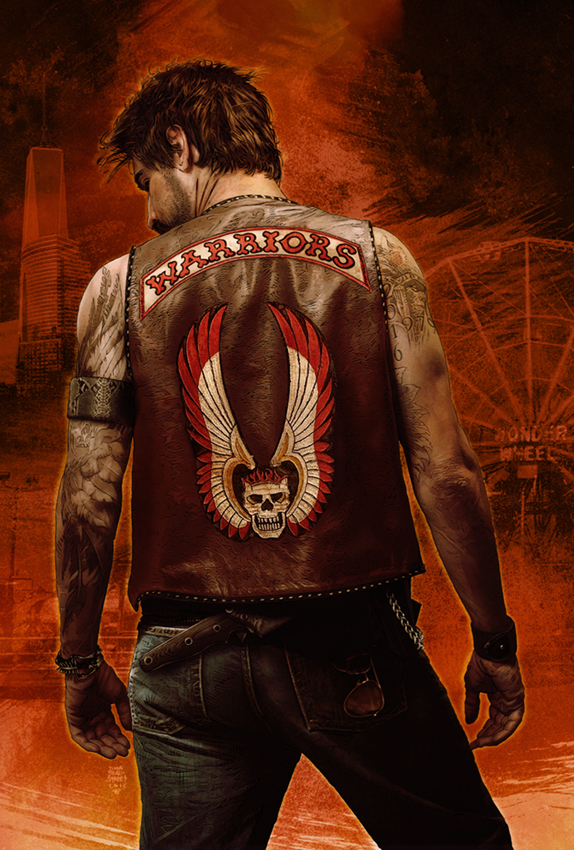 We begin now with a selection from Pendericki’s Threnody For The Victims Of Hiroshima . . . Hmmm. Perhaps that’s too dark? Nahhhh. Let’s roll with it. SO . . . First off let’s go with an unpublished black and white illustration of one of my favorite subjects . . . THE PUNISHER — How about a little off the top (2015) – Crowquill, brush, and ink on board. DIG! 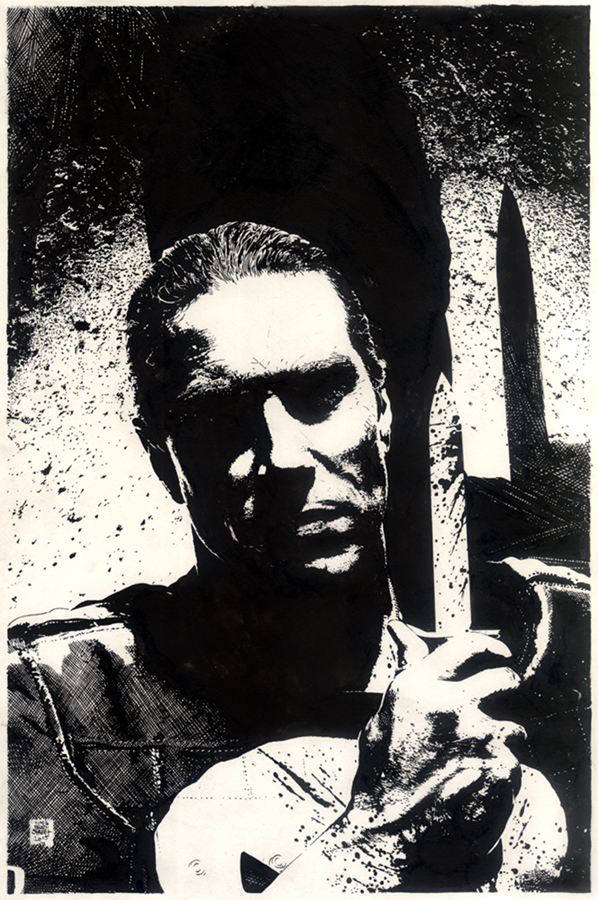 This is the original version of the cover before the overhaul. 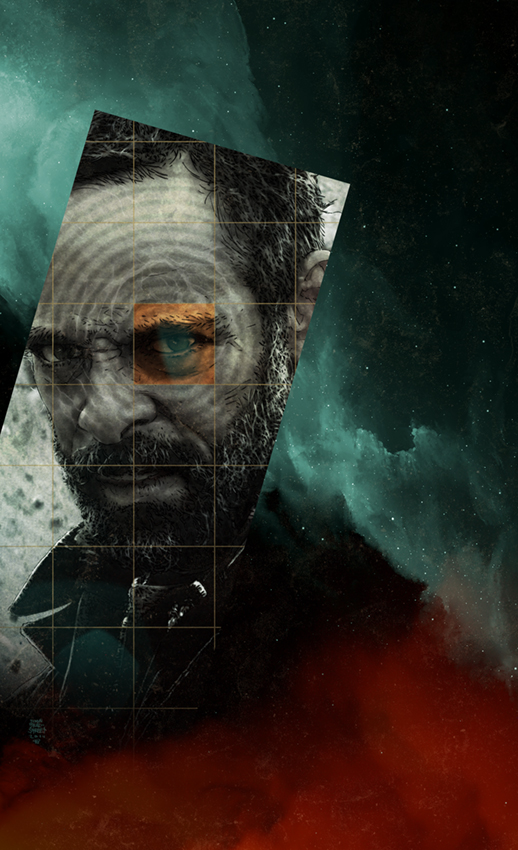 This is not new news in terms of the book’s release (which occurred in fall 2014). However, this project did slip between the cracks so . . . Better late than never – Especially considering the GREAT reviews this novel has received. Read on!

— Amoral, shrouded in secrecy, and answerable to no one, Section 31 is the mysterious covert operations division of Starfleet, a rogue shadow group committed to safeguarding the Federation at any cost. Doctor Julian Bashir sacrificed his career for a chance to infiltrate Section 31 and destroy it from within. Now it’s asking him to help it stop the Breen from stealing a dangerous new technology from the Mirror Universe—one that could give the Breen control over the galaxy. It’s a mission Bashir can’t refuse—but is it really the shot he’s been waiting for? Or is it a trap from which even his genetically enhanced intellect can’t escape? —

I ended up doing 2 versions. The superior first version, and the published version (which ain’t at all bad). Pocket Books did what they could to get the rights to use the photo-reference I picked for Alexander Siddig on the first pass. We were confident we wouldn’t encounter much resistance but at the 11th hour our confidence evaporated when the powers that be said – Negative. So we had to scramble . . . Even so, I think we did a fine job. I’ll drop a look at the rejected version next. 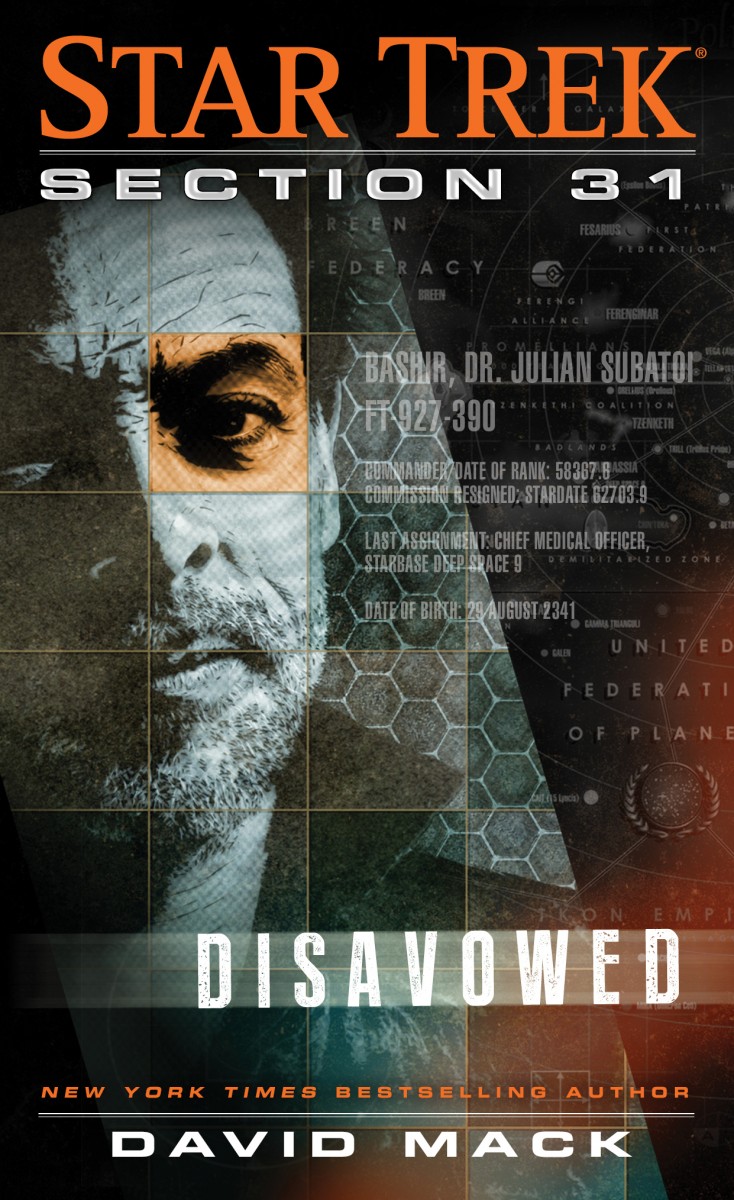 I won’t waste any time talking about why I dipped below the radar for 24 months. It’s moot.

Instead I offer to show a lot of work most of you haven’t seen. I was only partially productive over the sabbatical so it’s not like hundreds of pieces will magically appear. I’ll display a few a week and after a while we’ll have a little preview gallery established. First looks here – then maybe some of the trusted compatriots can grab the links and post them on the forum (where I will eventually reemerge to a degree as well). Tom’s getting set to tip out to Toronto for months . . . Expanse begins filming season 2 on the 22nd. Even so, we’ve got plans to make some headway on our publishing ventures this calendar year so stay tuned.

Trying to decide which piece to lead with . . . . I know! I’ll do a quick repeat on the Punisher Hip-Hop cover from Marvel. This version obviously has the titles added. Based on LL Cool J’s – Mama Said Knock You Out * 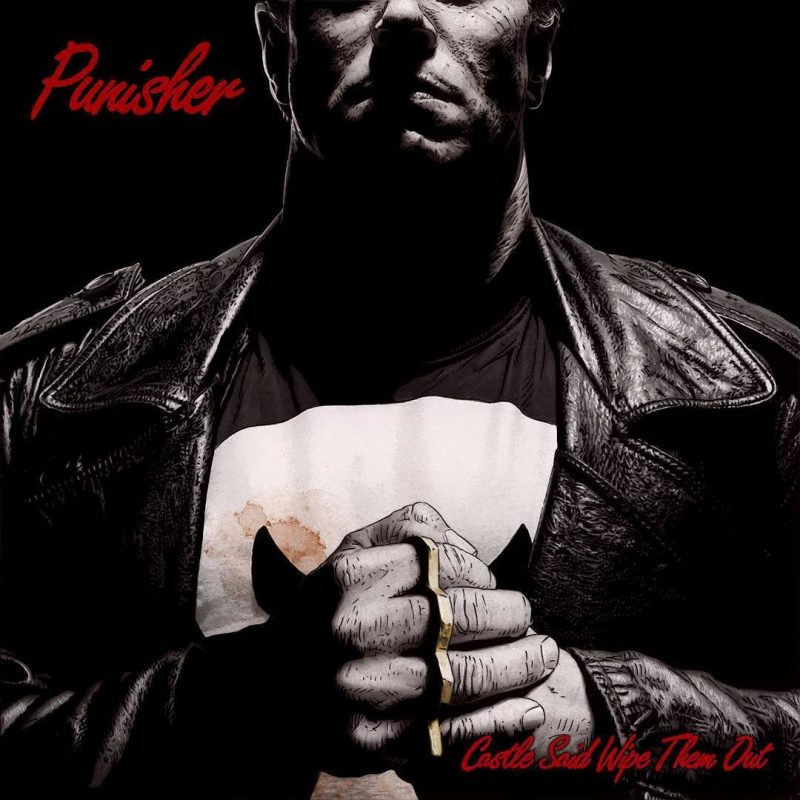 YES – You’ve found us! Where have we been? We’ve been through a lotta shit over the past couple years. A lot of changes. Things that necessitated my withdrawal from the social media eye.  Sometimes you have to re-focus, and that can take time. It did. Way longer than I could have ever imagined. Still . . . We adapt, we overcome. The pace of my return to a regular work-load has gradually picked up over the past 6 months. I’ve been doing some cool stuff and I can’t wait to share it with you friends.

Stand by for transport to our current homeworld – This internet space where we house our craft become creation. 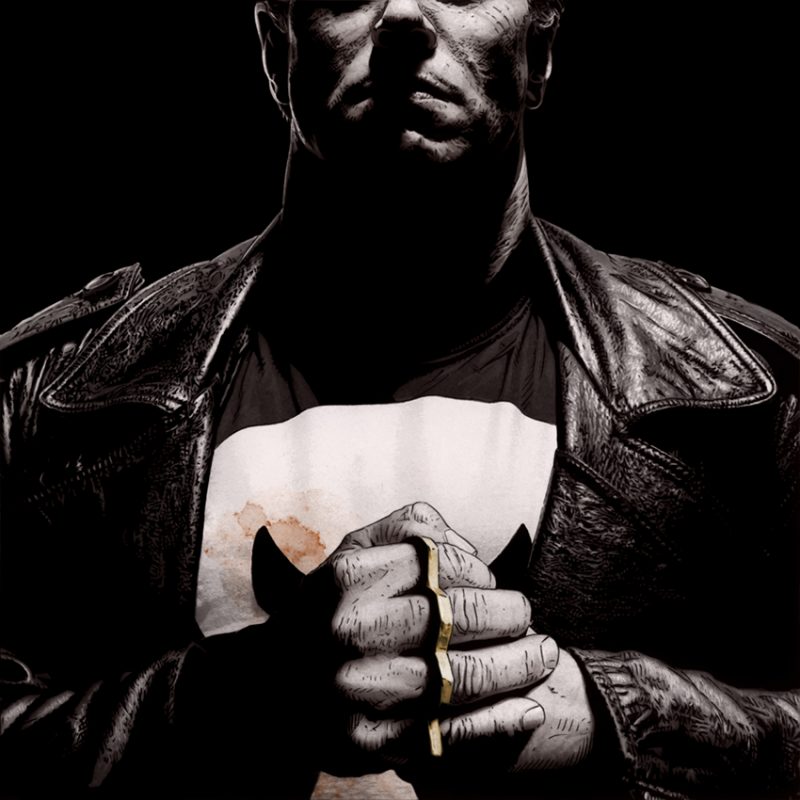