Wrightson, Bradstreet, O’Barr, and Locke, Collide in Sacramento this weekend!!

Who’s on the guest list? – Only, The Master of the Macabre – Bernie Wrightson!! Bradstreet will appear sans Mister Thomas Jane, his usual partner in ‘certain, mmmm dubious . . . activities’. Then there’s creator of The Crow – James O’Barr! Also appearing, you know him, you love him (cause he scares the crap out of you), you can’t sleep at night once you’ve met him, Vince Locke! – known for his work on Deadworld and A History of Violence and for his ultraviolent album covers for death metal band Cannibal Corpse. Hmmmm, who else . . . Oh yeah, RAW brother and AMazing artist/painter, five time Eisner Award nominee – Dan Brereton! Also – From the land of, ‘Are you friggin’ kidding me?’ comes a fistful of Mike, a double dose of BADASS in the form of Michael Golden and Mike Zeck!!! That’s right. It’s a hitter’s line-up in the River City this weekend for sure!

In addition to all the above hulabaloo (and with no expense spared by Sac-Con), Sac-Con is giving away an exclusive Master Chief poster created by cover artist Tim Bradstreet. Get it signed by Timmy, and Steve Downes, the voice of Master Chief!! While supplies last.

Courtesy of The Boston Examiner: Middlesex – Local NSA Field Officers stormed a live performance at a club in Dedham to apprehend a man wanted in connection with a possible ‘mass hallucination’ last week in Bridgton. On stage was local street legend, Rusty Blades. Blades says, “I’m just beginning the second set when the dudes just come outta the woodwork all around us. It was like, flash! And I’m back in Quang Tri.” –  Officers rushed the stage and apprehended the as yet unidentified man without incident. Officials later released the man following an intense 7 hour interrogation. A second assailant wanted in connection with the incident in Bridgton was taken into custody yesterday. Officials held the man overnight before releasing him without charges early this morning.

The identities of the two men have so far been withheld.

AP: Derry – Officials across the state are baffled at the loss of communication with the outlying North Eastern counties. Scientists at the weather center at Little Toll Island posit, “a massive marine layer has descended inland and blanketed the region with dense fog”. Driving conditions are critically hazardous, and the State Highway Patrol has issued a rushed statement that reads simply, “Stay in your homes”. The Governor has called the National Guard to active alert duty. All personnel are instructed to rally to their situ points without further delay. Federal law is in effect.

The State Highway Patrol has also issued a state-wide alert to be on the lookout for THIS MAN (at right). Wanted for questioning after surviving a massive explosion that rocked a fuel station in Bridgton early Wednesday morning. Witnesses report that he and another man fled the scene in a dark blue late model sports car. Further details were not immediately released. A second survivor is in custody, police said in a brief statement. The survivor was not identified. The nearest FBI field office in Boston has been mobilized after a State of Emergency was declared. Please stand by for further developments . . . <<<<<<<<<<<<<<<<<<<<

AP: Castle Rock – The town of Bridgton Maine was rocked this morning by what witnesses refer to as “wild attacks by creatures coming out of the mist”. Several fatalities have already been reported. Unconfirmed reports of tentacled monsters, giant swarming insects, and horribly loud moaning sounds issuing forth from this morning’s post-storm fog have been clogging local radio stations. While it’s not known if there could be a possible connection, a birthday celebration ended in tragedy when an out-of-control vehicle slammed into Frank’s Pump and Pay, a service station in the King’s Crossing section of downtown Bridgton. The unidentified party goers were walking through the Pump and Pay parking lot when the speeding vehicle struck a row of pumps which then exploded in a rain of fuel and fire. The death toll is unconfirmed. Witnesses report at least two survivors who stopped, dropped, and rolled to safety before climbing into a late model sports car and speeding off. If you have any information regarding the identities of the two survivors, please call Bridgton Emergency Dispatch – 1-800-663-2657

There are widespread accusations that the local US Military installment’s top secret, “Arrowhead Project” is to blame.

Across the street there was another crowd forming in a local supermarket watching the fire burn out of control. By 9:30 AM the fire had not decreased in the least. The police were holding it back to the fire lines, and discussing the tragedy in a tone which those seasoned witnesses of death seldom use.

“It’s the worst thing I ever saw,” said one old policeman.

At 9:35 AM, authorities in Castle Rock lost communication with Bridgton’s local Sheriff’s Department. Police ask that people remain in their homes until the fire is under control.

Please keep your hands inside the vehicle at all times . . .

Please forward all cash gifts to Tim Bradstreet, in care of this station. We appreciate your cooperation.

my great friend and writer/director Adam Alleca sent me some great behind the scenes pics from STANDOFF with me and Larry Fish. thought i’d slip them up here for your viewing pleasure.

this is me when i get to work in the am. generally i like a taller chair to sleep in. but they only had the small ones. that’s filmmaking.

those empties were there when i sat down. i swear. 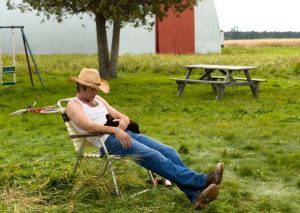 this lady came and woke me up. she asked if we were filming a moo-vee. then she touched me on the arm. i touched her back. the cameraman took this shot just a second before i yanked her over my shoulder in a move i learned from bruce lee. but this wouldn’t be the last we saw of her. 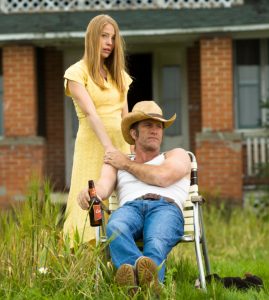 making movies is hard. on this day, i stood up for so long my feet began to bleed. the script girl kept trying to clean it up but i insisted they leave the blood.  the smell of it helps me get into character.  it’s not all fun and games like it looks.

some movies they don’t pay you a lot. but you do it anyway. so to make some extra cash, i sat on the stairs during lunch and put a cup out. not a lot of people came by, due to we were filming in canadia, far, far away from regular people. but when you are committed to doing what you love, every little bit helps. 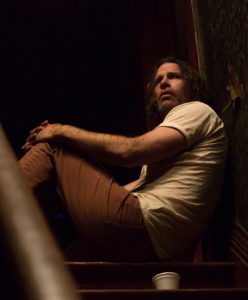 in this shot, i’m pretty sure Fish was talking to me about the script and how i should just only say my lines. but i’m a big fan of spontineaty. i really want to listen to Fish, but here the director is saying something about loading the gun. 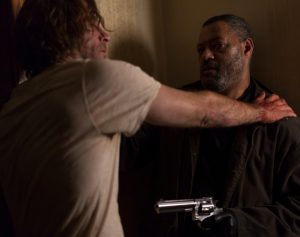 this is my gun. in a movie, i don’t always have to have the biggest gun, but it often works out that way. this gun, in fact was quite heavy. alright this is actually a posed shot. (those aren’t my real tits fyi. these shots are all un-retouched) 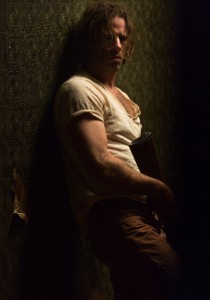 here’s that woman again. sometimes fans can get real crafty about sneaking on set. it’s a problem if they start talking while we’re doing a shot, which this lady did a lot. fans: when you’re sneaking on set, PLEASE remember that rolling means be very very quiet!  here, Fish really is telling her for the last time.

(it’s a good thing my real name isn’t on my trailer door. 😉 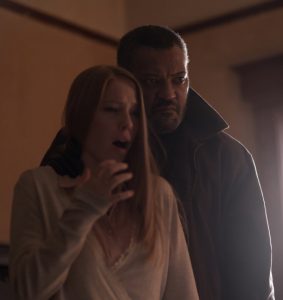 child actors require a lot of patience, but this one was so smart. she had a natural quality that tells me she is a star and going to be even bigger when she grows up.     here, the child actor is asking to hold my gun. i told her it was too heavy and she had to wait till she was a bigger star. 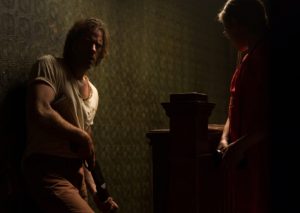 that’s all for now. i’ll leave you with the incredible poster for STANDOFF, now playing in select theaters. the explosions in the BG were my idea.

there are no real explosions in the movie, (SPOILER) but since there usually are some explosions in my movies, i think the fans will love it. 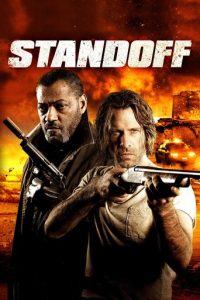 NEW YORK  – Syfy announced that it has renewed its critically-acclaimed series THE EXPANSE for a second season. The 13-episode second season from Alcon Television Group is expected to air in early 2017.

“THE EXPANSE is firing on all cylinders creatively, building a passionate fan base among viewers and critics alike, and delivering on Syfy’s promise of smart, provocative science fiction entertainment. We can’t wait to see where the story takes us in season two,” said Dave Howe, President, Syfy and Chiller.

Currently airing on Syfy Tuesdays at 10PM ET/PT, THE EXPANSE has garnered strong multiplatform viewership since its December 14 debut, with 4.5 million viewers sampling the first episode on Syfy.com, On Demand and digital outlets prior to the series’ linear premiere, and an average of 1.6 million P2+ linear viewers (L3) in its first three episodes.

Set 200 years in the future, THE EXPANSE follows the case of a missing young woman that brings a hardened detective (Thomas Jane) and a rogue ship’s captain (Steven Strait) together in a race across the solar system that will expose the greatest conspiracy in human history.

The series is based on the New York Times bestselling book series collectively known as The Expanse, written by Daniel Abraham and Ty Franck (under the pen name James S. A. Corey).

Bradstreet reporting . . . I took a vacation. I’m back. Nice to be here. I have a lot to catch folks up on but I generally let art do the talking . Stick around. Lots of bitchin’ artwork coming. In December I began design on a project for Activision/Treyarch. Pretty cool since I’m a fan of the Call of Duty game franchise. Even got to work on my favorite element of the property . . . Zombies. Like, World War II era Zombies. Like, Where Eagles Dare, except the Wehrmacht are reanimated corpses. I had a blast. Great folks at Activision. Big thanks to my art director/editor, Graham Hagmaier. These guys are amazing to work with. Poster was released into the public in January at all game outlets. 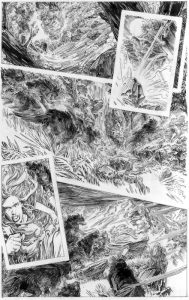 here’s the posters Street did for the SCI-FI channel, NYCC.